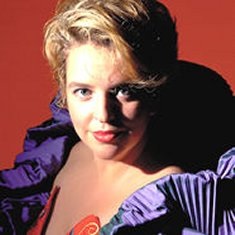 The Canadian soprano, Karina Gauvin, studied with Marie Daveluy. She has received bursaries from the Canada Council for the Arts, the Quebec Arts Council and the Royal Scottish Academy of Music and Drama (Glasgow). She is a recipient of the First Prize of the Montreal Conservatory in 1992 and many other prestigious awards: the 1992 Maggie Teyte Memorial Prize in London; the Guelph Spring Festival National Vocal Competition First Prize winner (1992); the Lieder Prize as well as the Public's Prize at the 1994 's-Hertogenbosch International Vocal Competition in Holland; the 1995 Virginia Parker Prize (Canada); the CBC Radio National Competition First Prize winner (1995); and the 1996 Soloist of the Year for the International French Public Radio Community.
Karina Gauvin has given recitals at the Royal Opera House (Covent Garden), St Martin's in the Fields (UK), Wigmore Hall (UK) the Bishopsgate Hall in London as well as in France, Switzerland, Belgium, the United States and in major Canadian cities. Ms. Gauvin has performed in opera productions in Oxford, the Aldeburgh Festival and the Glimmerglass Opera Festival (New York). Her repertoire covers music from Johann Sebastian Bach to Benjamin Britten, with a particular affinity for the works of W. A. Mozart.
In Canada Karina Gauvin has sung with the Orchestre Symphonique de Montreal, the National Arts Center Orchestra, Orchestre Metropolitain and Les Violons du Roy in Quebec City. Active as a recitalist, she has collaborated with several chamber music ensembles and with pianists Michael McMahon, Marc-André Hamelin and Roger Vignoles. She is a regular guest artist at the Montréal Chamber Music Festival and has also appeared at the Pusan International Chamber Music Festival in South Korea.
Karina Gauvin's 1999-2000 season includes several prestigious debuts, including the Handel and Haydn Society in Boston and the 92nd Street Y in New York City. Her Fall performances opened with the Mozart Exultate Jubilate with I Musici followed by a recital in Calgary.
In October Karina Gauvin toured Atlantic Canada giving a series of 10 recitals. She joined Boston's Handel & Haydn Society for Semele. In November she toured with Les Violons du Roy to several American centres. Her December engagements included George Frideric Handel's Messiah with Tafelmusik and with Handel & Haydn under the baton of Andrew Parrott soon to be released on CD. She returned to Toronto for a solo recital for the Women's Musical Club of Toronto, followed by her debut with the New York Collegium under the baton of Christophe Rousset. In February she recorded G.F. Handel's Laudate Pueri and Apollo et Dafné with Les Violons du Roy followed by Felix Mendelssohn's Lobegesang with the St Lawrence Choir in Montreal. In March she makes her debut appearance with the Victoria Symphony singing Britten's Les Illuminations with conductor Raffi Armenian.
Gustav Mahler's Fourth Symphony and J.S. Bach's St Matthew Passion (BWV 244) will showcase her exquisite voice in performances with Orchestre Metropolitain in Montreal, with Les Violons du Roy at the Ford Centre in Toronto and with the Kitchener Waterloo Philharmonic Choir. In June Karina Gauvin sings a "Music from Naples" program with Les Idées Heureuses and a solo recital with the French Embassy in Ottawa. She makes her Quebec Opera debut in Magic Flute as Pamina in June. Her summer engagements include her debut with les talents lyriques singing Asteria in Tamerlano under the baton of Christophe Rousset in France, Purcell's Te Deum and Jubilate Deo at the Elora Festival in Ontario, and Bach with Les Violons du Roy.
Highlights of her 2000-2001 season include a Canadian tour with Tafelmusik Baroque singing Mozart's Exsultate Jubilate, performances and recording with CBC Vancouver Orchestra, G.F. Handel's Messiah in Vancouver and Montreal, and her Los Angeles Chamber Orchestra debut singing the Giovanni Battista Pergolesi Stabat Mater. In 2001-2002 she will undertake a recital tour with pianist Marc-André Hamelin.
Past seasons featured Karina Gauvin internationally in both oratorio and recital. She sang a Bach program at the International Festival of Baroque Music in Lamèque, Einhorn's Voices of Light at the Elora Festival, Britten's Les Illuminations with the Scottish Ensemble in Edinburgh and Glasgow, Mozart's Exsultate Jubilate with I Musici, G.F. Handel's Messiah on tour with Les Violons du Roy, and a recital at St Martin in the Fields in London, England.
Karina Gauvin made two prestigious debuts that season with the Toronto Mendelssohn Choir singing G.F. Handel's Israel In Egypt, and with the CBC Vancouver Orchestra singing Bach's Solo Cantata BWV 82 with flute obligato, both broadcast nationally on the CBC. She was heard in G.B. Pergolesi's Stabat Mater with mezzo-soprano Catherine Robbin for performances in California, Texas, Washington, Quebec and British Columbia.
Highlights of recent seasons include Charles Gounod's Messe Solenelle with the Montreal Symphony under the baton of Charles Dutoit, G.B. Pergolesi Stabat Mater at the Festival de Lanaudière with Bernard Labadie, Britten's Les Illuminations at a castle in Edinburgh with the BT Scottish Ensemble, L'Orchèstre Metropolitain's (Mtl) production of for Engelbert Humperdinck's Hansel and Gretel and G.F. Handel's Messiah at the National Art Centre in Ottawa and with the Montreal Symphony at Notre Dame Cathedral, and a recital in Paris as part of the Francis Poulenc celebrations at the Bibliothèque National.
Her Analekta discography includes the Notenbüchlein für Anna Magdalena Bach, L.v. Beethoven's Egmont with L'Orchèstre Metropolitain, a program of Antonio Vivaldi motets which was nominated for a 1999 Juno Award, and a multiple award-winning program of G.F. Handel arias from Agrippina and Alcina recorded with Tafelmusik. Most recently she has released a recording of French Art Song - Fêtes Galantes - with pianist Marc-André Hamelin for SRC/Riche Lieu and a Christmas recording Images de Noël for CBC Records nominated for a 2000 Juno Award.
Karina Gauvin is one of Canada’s most sought after artists and her exceptional musical talent, combined with a voice of "outstanding clarity, freedom and freshness", wins this young soprano glowing praise and a growing reputation on the international circuit. having the ability to "instantly convey the musical heart of every piece she performs" she is an audience favourite.